Since currently I'm focused on creating a new level for the upcoming version of the game, I wanted to share some info on the process and the differences from the first game release (Episode Alpha or EA).

The original game had rather small maps filled to the brim with monsters, which provided a lot of action, but also was a bit too simple and sometimes unfair. By "maps" here I mean the level parts which are connected with each other by save points. In order to progress through the level every map must be completed without dying. For the next release I decided to increase the general size of the maps.

For comparison, one of small maps from the original version: 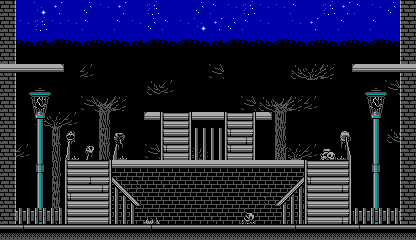 And a small map from the new version in development:

- adding safe zones and zones with lesser monster density which allows player to adjust to controls and character abilities, learn monster behavior and explore. For example, save points are more defined now and always provide a space safe from monsters, contrary to the EA version where transitions between maps could be crowded with enemies:

- increasing level variety with new hazards and platforming elements. Some of the maps have alternative paths and sections that are designed specifically for a certain characters. For example, here is a section of Sorceress specific path, which utilizes her teleport and levitate abilities:

Since larger maps also mean more opportunities to die, some adjustments were made to avoid situations when the walkthrough takes too much time. One of them is that killing every monster on the map is no longer required to progress . Instead there are mandatory encounters consisting of several waves of monsters. Also there are gates and doors, which open only when every monster nearby is dead. The map shown above, for example, contains 1 such encounter and 1 gate.

The exploration is completely optional, though, of course, is always rewarded in some way. The main path to the next save point is usually marked with special signs. These should be helpful in situations where you need to move quickly and when you need to explore every corner, since save points are also points of no return to previous map.

Of course, all information above is work in progress and subject to change.

Looks great, can't wait to see how it turns out.  Is this all added onto Episode Alpha, or is it basically a new game at this point?

It's a new game, too many things got changed.